Loneliness aches like a mother fucker, but the soundtrack sure is sweet. I caught Devilish Mary Duo at the Darkroom last night doing a set of classic torch songs - "Cry Me A River", "Stormy Weather", Nina Simone "Don't Smoke In Bed" and Doris Day's "Perhaps Perhaps Perhaps" are the ones I recognized - timeless songs, or at least song's from a time before popular music became teen music. These songs aren't "boy meets girl", they're about men and women, heart break and longing. Musically they reminded me of Django Reinhart ("Limehouse Blues" kinda feel), with the guitar and violin weaving a gypsy jazz magic. Vocally, oh man... any post-coital 3am memories you have will be triggered when you hear this woman sing... the way she put across the chorus of "Stormy Weather" had such a feel of heavy breath sexual intimacy I had to look away, some shit is just too personal. I haven't drunk in years, but I walked out into the night reeling... magic stuff.

Posted by thebeatmodnrocker at 1:01 AM No comments:

Lloyd Cole and the Commotions - Rattlesnakes

Lloyd Cole and the Commotions 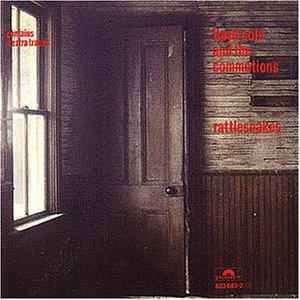 As literate as Morrissey, but with a rock sound influenced by American groups like Love, the Byrds and the (obligatory) later Velvet's and early solo Lou, 'Rattlesnakes', the debut by Lloyd Cole and the Commotions still sounds fresh. Cole formed the band whilst studying English Lit. and Philosophy at the University of Glasgow, and he wasn't afraid to show his book smarts in his lyrics, causing some derision from critics at the time who felt it was just "name dropping", but fuck that... Cole's lyrical "name drops" are incredibly evocative, allowing him to create complex believable characters with just a few deft turns of phrase and cultural illusions, and much like Morrissey's lyrics, they provide a pretty good reading and viewing list for any suburban teenager looking for a way to connect to something a bit deeper and more emotionally resonant than their usual pop and rock diet ever could.

and finally, the irresistible Traceyanne Campbell...
Camera Obscura 'Lloyd, I'm Ready To Be Heartbroken'
Read more »
Posted by thebeatmodnrocker at 2:07 AM No comments: This was something special... over two sets Ivy Rossiter (Luckless), just a beautiful girl and her guitar, made my heart reel and ache. With a stripped back skeletal guitar sound, heavy on the reverb and distortion, a strong confident voice of bruised sensuality and lyrics that seemed so personal I imagined them coming straight, un-edited from her diary, she held me spell bound from beginning to end.

Though-out I was reminded of early Cat Power ('Myra Lee', 'What Would The Community Think'), Jason Molina, Billy Smog, even Hank Williams with his 'high lonesome sound', very No Depression broken heart-on-sleeve (alt) country. In amongst her own songs she scattered a selection of covers - Springsteen, Billy Bragg, Leonard Cohen, Gillian Welch - inhabiting each and making it her own. Choosing to cover tunes by such heavy hitters as those cats is, I hope, an indication that she knows how good her own writing is.
So first thing on pay day I'm off to pick up her debut from last year... hopefully it will tide me over until the next time I get to experience some live heart ache.

Posted by thebeatmodnrocker at 8:57 PM No comments: 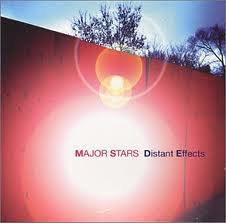 For unfettered wah-abuse, Wayne Rogers is always a name to look out for.  When not making amp's smoke, he ran the Boston record store/label Twisted Village (sadly closed in late 2010) with partner Kate Biggar, also a fantastic "set the control's for the heart of the sun" guitar. Together they have a serious back catalogue of heavy lysergic jams, in the bands Crystalized Movements, Vermonster, BORB (which stands for, are you ready... Bongload's Of Righteous Boo!), and Magic Hour. On Distant Effects Wayne and Kate are joined by the rhythm section of bassist Tom Leonard (if your band was on the Twisted Village label Tom has probably been a member at some stage!) and drummer Dave Lynch (Vermonster), and over the 4 tracks and 30 odd minutes, the band just slay. Byron 'Disco' Coley was, back-in-the-day a heavy Vermonster-head, saying of their Spirit Of Yma album, "for lo-fi splatter, this is the max"; Distant Effects is another Wayne Rogers synapse fryer. On closer 'Elephant', clocking in at a mere microgram under 15 minutes, the rhythm section lay back, letting the guitars fire off shards of noise and smears of feedback and drone... seriously cool shit.

The Bats - Free All Monsters 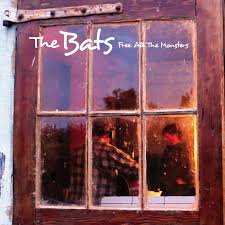 A new Bats album is the musical equivalent of those first few days when you're positive summer is on its way. Bob Scott and band have a way with melody, an ability to lift their 3 minute guitar pop gems up into the sublime. That the album is being released by Roger Shepherd on a re-activated Flying Nun just makes it so much sweeter. Recorded by Dale Cotton (HDU, Subliminals et al), Free All The Monsters has a beautiful spacious sound.  The songs themselves are wondrous in their simplicity, with such an air of freshness and energy, like a young band's debut, not a band coming up on their 30th anniversary with a massive back catalogue to lean on. The tunes rip by with a back-beat so urgent and insistent that you want to get up and move, verses you can't help but hum, choruses you'll want to shout out loud. In a just world the Bats would be chart toppers and considered part of the NZ music main-stream along side the Finns and Dave Dobbyn... still, being a bit selfish I like that they're still a little bit secret, something special we can share, just you and me.

King Loser - Caul Of The Outlaw 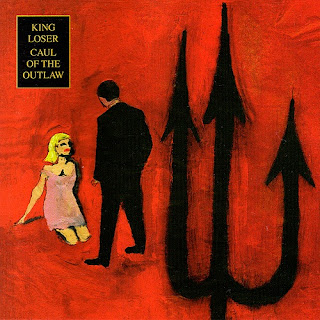 "Everything you've heard about rock'n'roll band's is a lie!"

King Loser were the white-hot rock'n'roll centre of New Zealand for an all to brief moment in the 1990's. A garage-surf-noise ensemble who set speakers melting and rumours flying where-ever and when-ever their sonic vibrations were felt. Boasting a worse track record with drummers than even Spinal Tap, the King's (never Loser's!) were centred around the love/hate core of Celia Mancini and Chris 'Cash Guitar/King of Cunts/the Heze' Heazlewood, between them boasting more rockin' and reelin' know-how than you, me and that shady lookin' guy in the corner put together.
Sometime around 1995 the group managed to solidify, with Lance 'Tribal Thunder' Strickland laying down a heavy Diddly beat on drums and the enigma Sean 'Destroyer' O'Reilly doin' what he do on guitar. That's the King Loser you hear on this, their 3rd album, released on Flying Nun in 1996... sadly the last too, with the band slowly imploding over the next year or so. No indication of that demise here though, Caul of the Outlaw is an album made by a band still in love with rock'n'roll, still pushing sound and style forward. Most notable here is the use of dirty distorted analogue synth (and oscillators?) as rhythmic beds for many tunes, adding a menacing yet beautiful slightly-delic/space vibe to the killer neo-garage surf rock. This is one great fuckin' album and a late gem in the Nun catalogue... King Loser - believe!

Posted by thebeatmodnrocker at 3:06 PM No comments:


Bebe Buell is probably best known these days, if at all, as the main inspiration for the character Penny Lane in director Cameron Crowe's celluloid love letter to his years as a scribe for Rolling Stone magazine back in the 1970's or perhaps as the mother of Liv Tyler. Tell someone she's a singer, with a new album fresh out and they'll either shrug in indifference, or worse laugh. Which is their loss as Hard Love is a tight little rocker of an album, kicking along at a tempo remarkable for a woman of her years. Mention of her exact age would be crass, but she was Playboy's November 1974 centrefold if you want to make an educated guess.
The sound and feel of  Hard Love has a lot in common with Ronnie Spector's excellent 2006 album 'Last of the Rock & Roll Stars'. It's New York rock with one foot in the recording studio and the other still in the back room of Max's Kansas City circa 1975. Bebe has an amazing history to draw lyrical inspiration from, and it's clear from tunes like 'Baby Baby' that she's still in love with rock'n'roll and the sort of snake hipped boys who play it. It's not all rock'n'roll lust though. 'Black Angel' a tribute to deceased Ramone's vocalist Joey is a beautiful rock ballad with real emotional punch... "walking down the street that bears your name... your photo's in my black angel frame/fly black angel, fly away"... not a dry eye in the house as that tune fades out! Along with the strong originals, Bebe also covers The Runaway's 'Heartbeat' and Gang of Four's 'I Love a Man in Uniform', a pretty obscure choice, but also a prime indication that Bebe's still got excellent taste when it comes to rocking' men and the music they make.

Posted by thebeatmodnrocker at 1:34 AM No comments: